This isn’t a Blue Pencil (could never challenge master Shaw), just a lazy, quick TextEdit. Alastair Johnston wrote an article on Helvetica posted on Smashing Magazine yesterday. I don’t want to comment on his strong opinion and cut out most of his subjective ranting. But some facts seem to have gotten a bit wonky.

The other day someone sent me a link to a website with the preposterous title of “The 100 Best Typefaces of All Time”. Topping the chart was Helvetica, and that stirred my ire. I dismissed the list because it was based on marketing figures from one source, FontShop, coupled with the opinions of half a dozen Berlin-based typographers, but I was still incensed.

This was a survey done by FontShop Germany in 2006, and included more than just Berlin-based typographers. Said FontShop website has precise info on the jury and criteria:

The ranking does not include free fonts or components from operating systems or software (Arial, Verdana, etc.), but focuses exclusively on licensable printers’ typefaces. Types which, over the centuries, have been interpreted individually by several different foundries (Bodoni, Garamond, Futura and so on) were judged collectively and included as a single entry.

…
For Helvetica, an explanation of its history helps to explain its longevity. Most typeface designs are the result of fashion or changes in taste; some are technologically driven. When iron printing presses were introduced around 1800, sharper, crisper types such as Bodoni and Didot were created. When laser printers came along in the mid-1980s, with their bitmapped fonts, students in Holland began producing typefaces that reflected the quality of the poor printing. Letters in Studio [sic] (Eindhoven, Lecturis, 1983) shows examples by Jelle Bosma and Petr van Blokland designed on a 40-pixel grid. Emigré, an early digital type foundry, produced Oakland (1985) and other lo-res types for the market.

Laser printers use outline fonts, bitmap fonts were used for screen representation or matrix printers. The name of the Dutch booklet he refers to is “Letters in studie”, meaning “typefaces in the making”, or “in study” or “experiment”.

…
At that time, two sans-serif types introduced in the late 1920s dominated the market for advertising. These were Monotype Gill Sans and Futura, of the German Stempel foundry.

Futura is a typeface by the Bauer typefoundry.

Suddenly there was a rush to create, imitate or revive sans-serif types. The Berthold foundry of Berlin dusted off the matrices for its Akzidenz Grotesk (1898), while their rivals, the Haas Type Foundry of Basel, decided to rework Schelter Grotesk, which had been issued by the Leipziger Schelter & Giesecke foundry in 1880. This became Neue Haas Grotesk in 1957, which was then picked up by the Stempel foundry in Frankfurt. It wanted to identify the type with the emerging popularity of Swiss graphic design and chose the ancient Roman name of Switzerland, Helvetia, and so Helvetica was reborn in 1961.

This is an incredibly brief summary of 30 years. Or what time does the author talk about when he says “suddenly”. Berthold did not rework Akzidenz-Grotesk until after Helvetica was issued (and became threateningly successful), it had been available ever since 1898, just became very popular in the 1950s. Neue Haas-Grotesk was based on Haas’ Französische Grotesk (which was based on Breite halbfette Grotesk by Schelter & Giesecke) and Haas’ Normal-Grotesk (which was based on Neue Moderne Grotesk by Wagner & Schmidt) with an eye on competing typefaces like AG and Monotype Grotesque. NHG was not “picked up” by Stempel but insistently offered to them by Haas against their initial skepticism.

The reason for the popularity of Gill Sans and Futura was that they turned their back on these Grotesks of the 19th century, which were worn out. Eric Gill took a new approach: pen-made humanist calligraphy was the basis for his type (he had also worked on the drawings for the London Underground alphabet with his mentor, Edward Johnston). These letters made more coherent word shapes and were easier to read than Grotesks. But Gill’s type standardized the distinct curled-tail “l” and shed-roofed figure “1” of Johnston’s design, which led to confusion with the capital “I” (a problem in many sans serifs).

Paul Renner’s Futura was designed to reflect the new machine age, with simple geometric shapes, straight lines and circles that gave it a cool Art Deco elegance. Both types are now imbued with a lot of cultural baggage, so Gill suggests the British Broadcasting Corporation and Futura has become nostalgic shorthand for the era of streamlining.

But in the 1930s, these two types were immensely popular in Europe and North America, and the other founders had to respond quickly. Returning to the 19th century should have been out of the question for the competition, except that the German foundries had been flattened in the Second World War and were slow to retool.

I don’t understand what the author wants to say in that last paragraph. Geometric sans-serifs were popular in the 1930s, yes, and all foundries “had to” issue their own, yes, almost all did, but well before German foundries cut down type production from 1942 on. Also, it never seized completely. Some foundries were destroyed in the war, for instance Klingspor, but others, like e.g. Stempel, not at all. The surge in the use of grotesques such as Akzidenz-Grotesk and – not to forget – Monotype Grotesque is rooting in the 1950s in Switzerland, and later the design of the so called “neo-grotesk” faces. The taste in typefaces was rather different in Germany with Futura, Erbar and Neuzeit still widely used after WW2. Also, the more calligraphy inspired style of Schneidler, Trump and Zapf was very popular.

Helvetica became a national brand, an identity for the popular “Swiss style” of typography of Emil Ruder and Armin Hofmann, which quickly spread as their well-indoctrinated students took the new look back to Yale and other American schools.

As Paul Barnes pointed out rightly: “As Ruder & Hofmann were of the Basle school they used Univers/Akzidenz Grotesk not Helvetica”. Fuelling the rivalry between the Swiss “schools”, Zürichers like Hans Neuburg and Josef Müller-Brockmann were advocating Helvetica. The latter designed promotional material for NHG and Helvetica such as the famous Satzklebebuch binder. Only Basel based designer Albert Gromm once designed one of the initial marketing flyers for Helvetica in 1959.

Graffiti protesting Bank of America in Berkeley, California, is chalked in a convincing Helvetica form.

Bank of America does not use Helvetica, their corporate typeface is Franklin Gothic. The chalk artist does’t even try to mimic Helvetica but the bank’s actual typeface.

In the late ’90s Microsoft was selling a million copies of Word each month and gave away 14 fonts with its program. Its knock-off of Helvetica is called Arial. Linotype had taken over Stempel, and then Haas, and so consolidated its ownership of Helvetica and many of the clones.

Stempel had held Haas shares since 1927, first 45%, from 1954 on 51%. Stempel’s majority of shares was owned by Linotype. Haas bought Deberny & Peignot (and thus Univers) in 1972. When Stempel closed in 1985, their Haas shares went to Linotype, who purchased all rights to the Haas foundry in 1989.

…
After the adoption of the Swiss style internationally, another event caused the persistence of Helvetica: the arrival of the personal computer. Apple could fit only a few types into the memory of its LaserWriter printer driver. Times and Helvetica were decided by executive fiat (based on their popularity at the time); Symbol and Courier were required by the operating system. Then, a team of experts was called in to choose more types: Palatino, Zapf Chancery, Avant Garde, Bookman and Century Schoolbook were picked by committee. One of the committee, Sumner Stone, told me, “In retrospect they seem pretty strange and random. … Times and Helvetica were redrawn, and with Helvetica the narrow and oblique came free because it was just an algorithm.” With only garbage to pick from, there was a visual blight of Times, Helvetica and Palatino in the early days of “desktop publishing,” which lasted well beyond their sell-by date.

My impression is that people hating Helvetica never really looked at the original but are – rightfully – detesting this lousy version that comes with computer operating systems, digitized in a hurry in the early days of PostScript. For a detailed comparison and more information on Helvetica’s history see the Neue Haas Grotesk feature site. 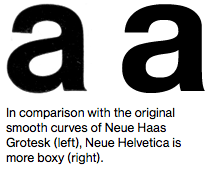 The original design of Neue Haas-Grotesk was not as square as Neue Helvetica. Also, I wouldn’t say that a, s and e in Helvetica “have many  characters that resemble one another”, as he suggest in the following paragraphs, but that rather I, l or rn and m can be confused.

…
Of course, most lay people can’t tell one sans serif from another. When people say they prefer Helvetica to Arial because the latter is a bad copy, I ask if there’s a difference between a Big Mac and a Whopper, and, more to the point, would you honestly feed either to your kids?

Adrian Frutiger, “Mister Univers” himself, tried to improve on Helvetica with the Univer [sic] series, begun in 1954 (and he succeeded, causing the Helvetians to expand their family of weights in response), but then, in his maturer years, he turned his back on Univers to design the family that bears his own name (Frutiger, 1976).

Frutiger did not try “to improve on Helvetica”. Maybe he tried to improve the grotesque model/genre. Frutiger begun work on Univers much earlier than Haas did with Neue Haas-Grotesk. Both typefaces were released at the same time, with all foundries knowing about the work of the others (also Bauer with Folio, released the same year, 1957). The expansion of Helvetica was not “caused” by Univers.

Comparison of four sans serifs from “My Fonts” [sic]

Everything about Helvetica is repellant: from its uptight aura to its smug, splendid isolation. How it persists in the face of such brilliant alternatives as Frutiger and Syntax defies logic.

It would help if the samples of each typeface showed the same text/characters, which is very easy to do on MyFonts. What a weak image to prove debatable points.

Can’t bring myself to quote the rest of the article, read on over at Smashing mag.