This is a letter I wrote to Eben Sorkin in October 2009, trying to explain my feelings about the reunification and the autumn of 1989 in Germany.

»Can you tell me more about the 3rd of October?«

This year [2009] we celebrate the 20th anniversary of the Berlin wall coming down, which took place on November 9, 1989. However, the government decided some 18 years ago or so to make the 3rd of October the official memorial date, when the legal and monetary reunion took place in 1990 (so actually only 19 years ago).

Thinking about that time in 1989 still moves me to tears, like yesterday when I passed a sign/memorial on the street at Potsdamer Platz. There are a lot of interviews, clips and original audio pieces broadcasted on the radio at the moment and I am totally taken in by that – every year again. For example a few days ago it was the 20th anniversary of a special occasion in the German embassy in Prague where more than 700 refugees had been seeking shelter. After more than ten days crumbed together in the garden of the embassy they were allowed to travel to the West. There is a famous clip with Genscher, the minister of foreign affairs back then, going something like: “I came to tell you, that today, your depart…” and nothing more than incredible screaming was to be heard. Everytime I hear that, and even when I write about it now, I get goosebumps.

That all may sound weird, because especially younger folks don’t quite share my strong feelings, but I am old enough to have a clear memory of these days 20 years ago. I grew up close to the border in the West, maybe you have heard of the so-called “Fulda gap”, a potential spot for a cold war show-down? Every guest was taken to the frontier, and everybody had relatives in the East, sometimes just a few kilometers away, but unfortunately on the other side. My father is from (West-) Berlin, so our family used to embark at least once a year on this long and exhausting journey through the former East by car, waiting for hours at the border, cars getting searched. I remember sending parcels to the Eastern relatives with the classic West stuff – coffee and chocolate – every now and then.

Since the embassy thing in September 1989 it was clear that there was a change going on, but it still was a big surprise when suddenly on November 9 we were able to watch the wall coming down on television. That was a very emotional moment for us Eastern West-Germans. And then suddenly they all came over! The Fulda region already admitted a lot of refugees since the summer of 1989 but then from November 10 on Fulda was INVADED by Thuringians and Saxonians, being one of the nearest cities. They all came to pick up their 100 DM “Begrüßungsgeld” (welcoming money), queueing for hours in the freezing cold, with babies and elderly because everybody got 100 DM. The city council couldn’t cope with the big run and asked in our nearby school (me aged 16) for volunteers to help. So I found myself taking care of the East-German visitors and refugees for more than a week, providing tea, soup and babyfood etc. 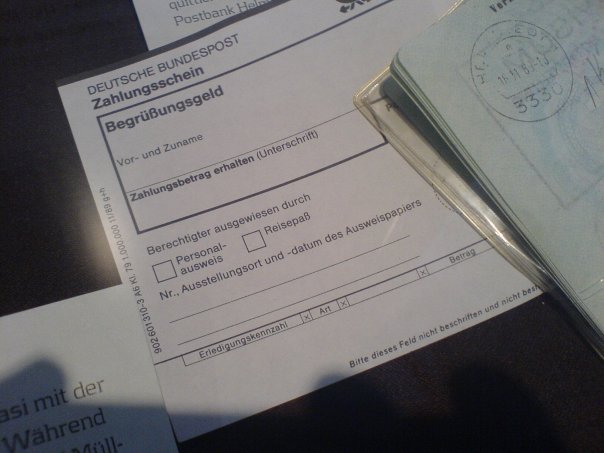 The form to pick up the Begrüßungsgeld

After some occasional visits I made my first serious steps direction East in 1991 to Weimar to join some fellow architecture students, and from 1993 on studying visual communication at the Bauhaus University. I ended up living there for almost 13 years, with some breaks inbetween in Berlin, The Netherlands and Hamburg. If I’m asked where my hometown is, I tended to say Weimar instead of Fulda for many years because I lived there for the most important part of my life and met most of my best friends there. And that all would never have been possible without the German reunion. My life would be completely different.

This, in short, is the background of my great emotional involvement with the German reunification. I wish more people would still remember these days – and the years and conditions before the autumn of 1989. When I moved to the far West, to Rhineland (Düsseldorf, Cologne area) I was shocked, that most of the people I met there had never been to the Eastern part of Germany. After all these years! And unfortunately meanwhile a lot of East-Germans tend to romantizise the GDR times as “not all bad” which is absolute rubbish. It was a bad, criminal, repressive system, let us not forget. 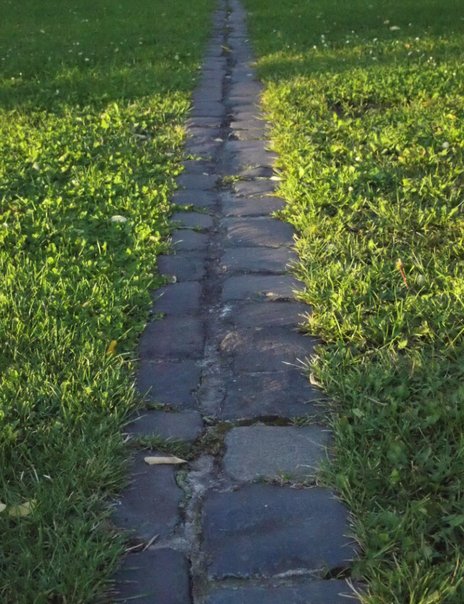