I want to share some Sunday afternoon armchair research. As you (Americans) probably know from signs or hand writing, some typefaces have quotes that – when used for English – look flipped, instead of “rotated”, usually of straight or tapered form. Germans don’t like those because we use your opening mark as our closing mark and then they point into the wrong direction (see the red quote below). This is an on-going complaint about Verdana and others, most recently the new Apple OS fonts (which have since been changed). Image by Frank Rausch: 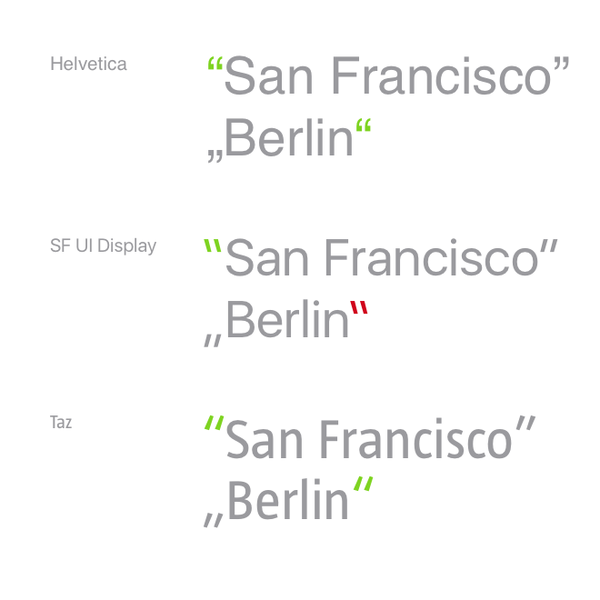 When people ask me where this comes from and why, I usually say, it’s a sign painters tradition and because it often looks better in English, but I would love to know a better explanation.

I asked on the Sign Painter Support Group Facebook page and hoped to get an answer from John Downer. He pointed me to a letter he wrote for Emigre Magazine in one of the last two issues of 1996. With this helpful index I found them in issue No. 39 and 40. I asked on Twitter if anyone still had those Emigre mags and within minutes super helpful friends replied and Pieter van Rosmalen sent me photos of the issues’ letter sections:

Downer’s reply in issue No. 40

I also asked Cyrus Highsmith as I once contacting him about the flipped quotes in Relay and if he could make a “rotated” version for setting German. He provided an interesting other answer:
In some designs, flipping the quotes is necessary to distinguish the left and right quotes from each other. For example, if the wedged-shaped quotes in SF UI were rotated instead of flipped the left double quote and right double quote would be basically identical. And that would look weird in English. Taz just barely avoids this because of the tapering.

Matthew Carter just seemed to like them better for Verdana. (Upon request, he changed the quotes in Verdana Pro though).

And Mac McGrew interestingly calls the straight ones uniquotes:

While we luckily don’t live with the constraint character-set of 265 glyphs anymore, this discussion might continue as there are so many different ways how to use the standard quotation marks in different languages. Now one could use a {locl} feature, but getting it to work in different apps is still tricky (I remember long email exchanges with Kent regarding this) and it only works if the language for a text/document is set. I propose keeping the rotated form the default and perhaps use the cool U+201F DOUBLE HIGH-REVERSED-9 QUOTATION MARK (‟) more?