A timeline of events related to the history of Akzidenz-Grotesk (to be updated as we discover new things):

28 April 1898: registration of 13 sizes of Accidenz-Grotesk (regular) at the German Musterregister and published in Deutscher Reichsanzeiger

1908: Berthold acquires Theinhardt foundry (and add their offerings to the Theinhardt specimen book of 1908/09)

First read this post from a few years ago. This article here is only about the things we found since. “We” means Dan Reynolds, with who I talked a lot about this topic lately, and me and some other people mentioned in the text.

But to recap in one sentence – there is every reason to believe that Ferdinand Theinhardt has nothing to do with the design of Royal-Grotesk or Akzidenz-Grotesk as they were available at H. Berthold AG, Berlin. Further things that underpin this statement are:

1
A shaded sans called Schattierte Grotesk I found in a Bauer & Co Stuttgart (not the same as the Bauer foundry in Frankfurt) specimen from 1895 that I looked at at UvA’s Special Collections in 2011. It appears to be pretty much AG with drop shadow, which also may mean that there was a version of this sans without shadow somewhere. It would have been quite easy to expand a series by a shaded variant, but coming up with these letterforms just to use them in one specialized display style seems unlikely.

That was what led me to believe some styles of AG, like a light regular weight, may have originated at Bauer & Co. I did not find any in earlier specimens though. I had made a note to double check the date of the specimen because having something like AG in 1895 already would be quite remarkable. It’s always hard to date these books exactly. Then last year, John Lane emailed me that he found a full-page ad for Schattierte Grotesk in an issue of Archiv für Buchgewerbe 33/12 from December 1896 – later but still 11 months before Berthold acquired Bauer & Co, which they did on November 9, 1897 [see Bauer, Chronik der Schriftgießereien]. This dates Schattierte Grotesk to at least 1896, so before any AG action at Berthold. And only three years after Berthold picked up casting typefaces at all, which was in 1893. Before that they only made brass rules.

2
An AG showing (one style, 13 sizes) by Bauer & Co and Berthold in Schweizer Graphische Nachrichten from September 1898 that Joep Pohlen found. 1898 is also the date that Berthold had always given, at least since 1921 when their first publication mentioning a date for Accidenz-Grotesk (early spelling with cc) was published. [See image from Berthold chronicle in Part 1]

Sans-serifs were just a small, rather unimportant position among many wild designs that type foundries offered around 1900.

3
Neither Dan nor I could find any documents from the Königliche Akademie der Wissenschaften that were printed in something that looks like Royal-Grotesk – the use case the typeface was allegedly commissioned and made for in 1880. I did not even find a single use of any sans in documents from 1880–1910 that I looked at.

So there must have been a Royal-Grotesk available at Berthold in late 1902 or January 1903 – five years before Berthold bought the Theinhardt foundry. But calling it a “new, quite usable typeface” and critique the design doesn’t exactly sound like this font was around since 1880 and used in public documents. Emil Wetzig has 1902 for Royal in Seemann’s Handbuch der Schriftarten, which is not always correct but often a good indicator.

– We need to date the Theinhardt foundry specimen — “Hauptprobe. 1892. Gr. 8o (mit mehrfarbigen Titelblättern)” [Jolles] — that was issued sometime between 1890 and 1905. Everyone seems to give a different date for it, or is talking about different editions? Here Henning Krause’s copy and take on the year (he thinks 1890). ESG based his argument on “Neuheiten. Ferd. Theinhardt, Schriftgießerei Berlin-Schöneberg 1. (specimen 8° without title page) without year (ca. 1902)” as his source and remarks that it’s from 1892 but that it did not come into circulation before 1905, according to additional pages in his issue.

– If Berthold only started its type casting business in 1893, did they even employ punchcutters capable of original designs this quickly? Or did they pick up an almost ready series with the acquisition of Bauer. Need to check both companies’ specimen books from before 1897 again.

– No one could ever show any Royal-Grotesk in use from before 1902/3. Where are the Theinhardt-Royal samples when it allegedly was around since 1880? Until someone comes forward with examples or other proof, could we all please stop repeating and regurgitating the Theinhardt story?

– Did anyone ever find a source or mention before GGL’s 1998 lecture and 2003 interview that stated the connection between Theinhardt and RG/AG? Maybe the idea was not even GGL’s, but someone before him? Where did this hunch come from? Just this one late Theinhardt specimen that included AG? 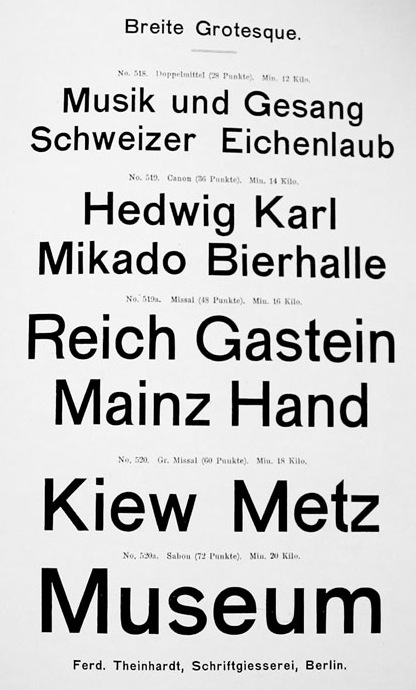 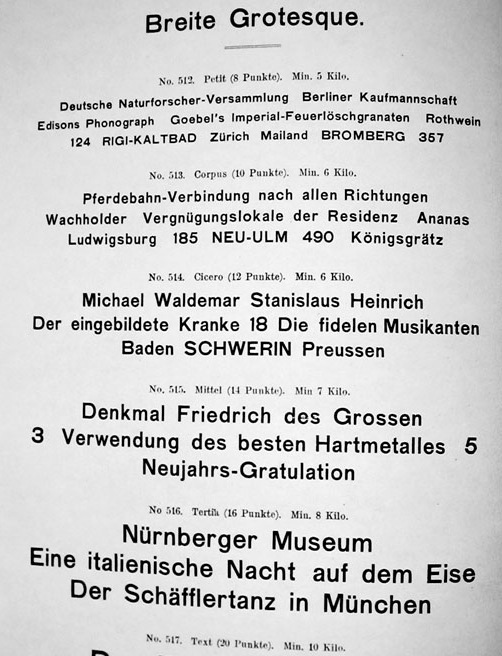