In case someone actually still wants to buy fonts this year I better hurry up with my report. Alright, what more did I buy?

Okay Type:
They (Jackson and his cat) have some really super fonts in the making, but only Alright Sans is ready for licensing yet. I had kept track of this interesting amalgam of a sans for quite some time already as it gets mentioned almost every day on typophile. Not purely humanist in style and proportions it combines open forms with the regularities of a classic grotesque and daring slanted a’s and g’s as alts in the italic. Makes me think of good ol’ Syntax and the Ideal Italic again.
Due to my (meanwhile) mission to get as many different families as possible, I just boughts five single weights at MyFonts because one can only get the whole family on Okay Type’s website. (Why?)

Exljbris:
Now while I was there I did what probably everybody does at MyFonts from time to time—getting a couple of free fonts. Not many of them are suitable for professional design work, but in my opinion the typefaces by Jos Buivenga are. I got some complementary styles to the free version of Calluna, a versatile text face (and since Christmas joined by a sans to become a super-family) plus the flamboyant conceptional experiment that is Geotica—a high-contrast Didone only built up of geometric elements. The different fills, swashes and ornaments make it an exciting display venture.

The Asset:
All those typefaces hopefully complement the ones I got earlier this year:

Eames Century Gothic* Modern: I just had to order immediately, it simply is the impersonation of Erik van Blokland. One can dive deep into the individual shapes for days, the display styles make instant logos (beware, not allowed in basic license), the ornaments and numeral fonts are a playful plus. So enjoyable.

Hard to avoid the typefoundry Bold Monday this year, especially Nitty, which is surprisingly comfortable to type text in and Panno by Pieter van Rosmalen. I started out with the friendly priced sampler and got the full family of Paul van der Laan’s humanist sans Flex later.

Half way through my shopping spree Commercial Type, or rather Christian Schwartz announced the release of Neue Haas Grotesk to be near. Halleluja! Ever since working on the Helvetica Forever project I wished for that to happen. (We actually wanted to type-set the book in this newly digitized version back in 2007, but somehow either it wasn’t ready by that time or they didn’t manage to sort out the legal issues, so we ended up with Neue Helvetica.) I have no idea whether I’d ever use neue Neue Haas Grotesk, it’s just so tempting to get and be it only to show the world how Helvetica was meant to look like. But—maybe later.

Because all of a sudden the tide was turning: the notice of some unexpected debits abrupty shrunk my font-budget by almost 50% (now ~1500 €). But there was still so much left in my FontShop, A2 and MyFonts Carts :/
So these, among others, are typefaces I unfortunately had to skip (I should make a shortlist of nearly-bought fonts at some point):

Freight Micro, Text and Display I’m in love with this extensive super family by Joshua Darden/Garage Fonts for quite some time now. Especially the Micro (Italic) styles have great display qualities, too, although originally designed for extra small text.

Hercules, a quirky Modern/Scotch by František Štorm and also his
Farao, a playful take on the Clarendon genre. I like most of his typefaces although you realise some similarities after a while (the a’s e.g. are typical), but that is the case with other great type designers, too, like Gerard Unger or Fred Smeijers (his g’s and ß’s).

Lavigne got postponed as well, a dulcet text face by Ramiro Espinoza with great ampersand and complementing display styles for even more lavish demeanor.

Relato by Eduardo Manso attracted me with its distinct cursive. The rather low-contrast makes it a designated book face suitable for long-distance reading.

Iowan Old Style by John Downer, a calm, no-fuss text typeface, quite atypical for him actually.

Grot 10 from newly formed foundry A2. I especially like the true italics, which are still rather unusual for an “old-style” grotesque. There have been a lot of these kind of revivals popping up lately, like Plan by Typotheque, Fakt from Ourtype, Embarcadero by Mark van Bronkhorst or the recently expanded Founders Grotesque from Klim, to mention a few. Type expert Stephen Coles even names 2010 the year of the Helvetica replacements.

On that note, let me put you off until the third and final installment with some more shopping-occurrences, my final receipt and conclusion.

Funny, while browsing some reviews of Helvetica forever I found this one on Designboom, which is featuring almost only my tiny little article on typesetting methods. Five pictures of one spread*, a boring side note in a thrilling story. Must have made an impression.
No pic of the historic essay, none of the comparisons, only one of the Hoffmann-booklet …

Buried deep down on this blog you can find some posts from the time I was working on the book. And maybe one day I will write about the making of and the contributers involved.

*Originally I had one page per technique but it got halved and halved further during the process. Understandable. Could be a book on it’s own. 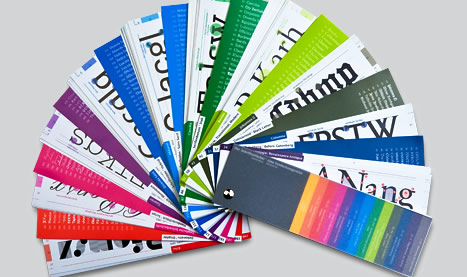